Acid Steve first emerged from London’s underground warehouse scene in the mid to late 2000s, learning his trade by DJing every weekend as part of the Every1Sound techno soundsystem, putting on crazy and hazy parties across the capital’s warehouses, empty abbatoirs, ex-porn company’s storage offices, and plenty of other recycled spaces that he either can’t remember or would rather not share on a public website.

In 2008 he started his own techno night ‘Vote Techno Party’, a proper crash course in all things party-related, from losing loads of money on ticket sales, acting as ‘security’ on the door before rushing up to the decks and playing, promoting online and handing out flyers to ravers at 6am on their way home.

Steve then got a big break when Aaron Liberator invited him to be a resident DJ at Stay Up Forever’s infamous acid techno night ‘Nuclear Free Zone’ at the legendary Club 414. This evolved into a new event at the club: ‘Smash Techno’ (launched in 2010), where Steve was resident alongside Aaron Liberator, Birinight and DJ Roo.

With London parties coming thick and fast Steve started gaining international attention and gained bookings (some with help from Rachel Rackitt of Stay Up Forever/Loud by Design) at clubs, festivals and warehouses in Barcelona, Colombia, Czech Republic, France, and Italy.

He also brought back his Vote Techno Party promotion for a party at the Jamm (with guidance from Aaron Liberator to make it a success) with Punk Floyd (the acid techno supergroup) headlining.

Around this time Steve was lucky enough to be invited by DDR into his studio, to learn close-up from the legendary acid producer.

This led to the launch of Steve’s vinyl label Avinit Records in 2011. This features his own productions alongside a mixture of established acid techno legends and leaders of the new wave of acid techno.

He continues to release on Avinit, play in the UK and internationally, as well as promote occasional events including Not A Public Nuisance in collaboration with Hackney Sounds, one of the London systems (along with E1S, Stinky Pink, Malfaiteurs, KSS, Manik) he regularly plays on whenever possible.

In 2019 he launched ‘Pounding Warehouse Recordings’. This is a digital label releasing banging techno mainly from the non-acid side of things but at a similar bpm to acid techno for mixing things up.

His sets are never pre-planned and depend on the vibe, crowd and DJs before and after, but as a rough guide: usually a mixture of upfront acid techno, sometimes a classic acid techno banger or two, some unreleased tracks, plus some non-acid pounders to build and vary the set and atmosphere. 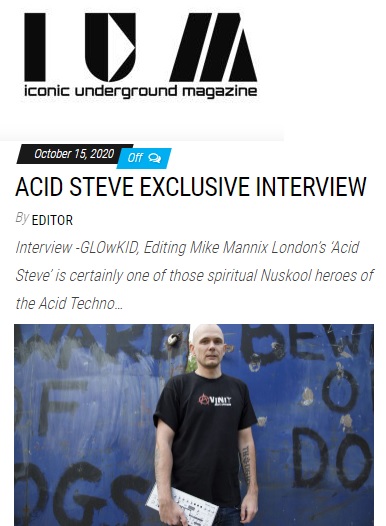 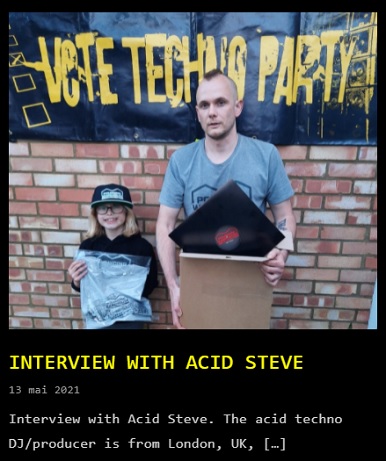