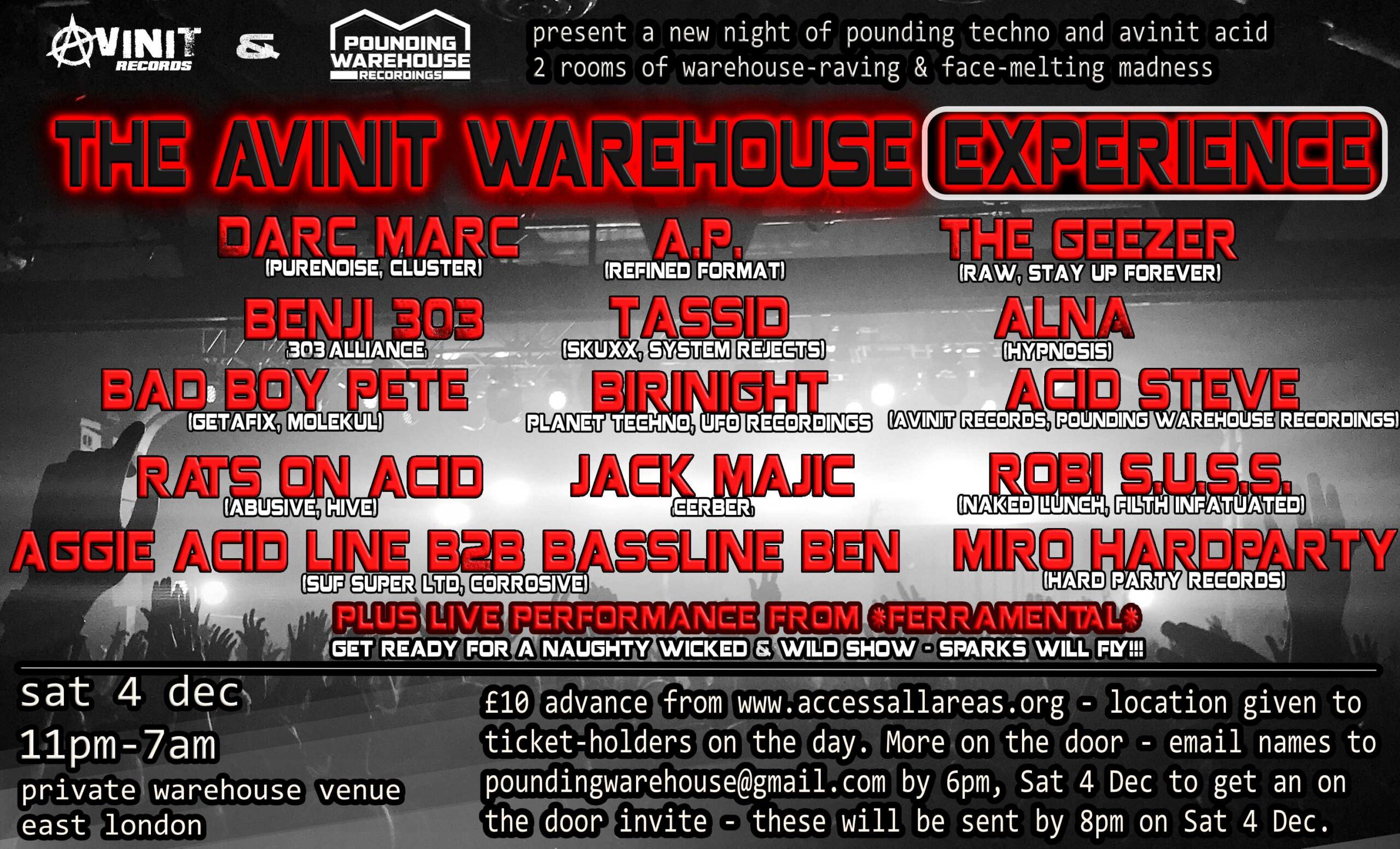 Avinit Records and Pounding Warehouse Recordings bring you the launch of a new night for people who like pounding techno and avinit acid.

The Avinit Warehouse Experience is where you’ll hear techno artists with roots in the underground scene, including those who have also risen to the top of hard techno charts, released legendary techno tracks , and shaped London techno sounds and scenes for many years.

Expect a friendly up for it crowd ready to rave hard, in a warehouse venue vibe, everyone together in a safe space, Djs, live acts, performers, crowd.

DARC MARC (live set)
After more than two decades of rocking dance floors and a case load of releases and remixes on a plethora of labels, Darc Marc has carved an indelible name for himself as a DJ and producer of some of the finest techno to come from the UK.

In 2019 Marc had a techno hit with Dirty Rocking Bass, Initially released on vinyl on Cluster X, which got supported from DJs from around the world including Amelie Lens, Dense & Pika, I hate Models, Hector Oaks, DAVE The Drummer, SPFDJ and Nicole Moudaber who featured it in her Essential Mix on Radio 1.
https://www.darcmarc.com/

A.P.
A regular in the top-10 best-selling hard techno artists, over two decades A.P. has elevated his DJ career to feature at some of the biggest venues and parties all over the UK and Europe, as well as gigs further afield in South America.

His eagerness to continually propel his music forward, also makes way for some exciting and unpredictable moments on the dancefloor while he is performing.

THE GEEZER (live set)
A pioneer of the London acid techno sound. Geezer’s recordings (and his many collaborations) have appeared on labels as diverse as Stay Up Forever, Tortured, Smitten, Eukatech, Routemaster, Intensive, Cluster, Infected, Boscaland and Bionic Orange.

He is the mastermind behind the R.A.W.(Ripe Analogue Waveforms) label, as well as running the acid label WAH WAH with Chris and Aaron Liberator . His awesome live sets have been ecstatically received across the world from Japan to Venezuela.

ALNA
ALNA founded her London based event ‘Hypnosis’, guesting and playing alongside D.A.V.E. The Drummer, Jerome
Hill, Vinicius Honorio, Toni Alvarez, to name a few. She has played in Italy, Spain, Netherlands and many UK clubs and warehouses.

ALNA is a visionary artist who looks to the future and the underground rave scene for inspiration. A skilled and talented selector, her performances and productions are energetic, engaging and captivating.

BENJI 303
Benji303 is a UK based Acid/Techno DJ & Producer, with an influx of releases coming out on vinyl and digital on labels such as Stay Up Forever, Cluster, RAW, Acid Test, Flatlife, 303 Alliance, Hive, Avinit, Interstate One, Stompin’ Ground, Dirty Sound and Chase Yer Tail, to name a few.

His tracks have been played and supported by the likes of Perc, Freddy Fresh, D.A.V.E. The Drummer, Chris Liberator, Mark EG, The Geezer, Pet Duo, Aaron Liberator and many more.

TASSID
Tassid is the co-founder of System Rejects vinyl label alongside Austin Corrosive, Olly Berry and MK 303, and he is the owner of Skuxx digital label.

As well as his own labels, Tassid has releases on other labels such as, Corrosive Records, Cluster, Cluster 909, Stereo Chaos, Interstate One, Impact UK, and Acid Test, and his productions regularly appear in sets from the likes of Perc, Dax J, DAVE the Drummer and many more.

His productions are much sought-after, with releases appearing on the French label Molekul, Carl Cox’s Techno Division Vol. 3 (under his Noctilucence alias), plus seminal acid labels such as Routemaster.
https://badboypete.bandcamp.com/

Since his origins as a a DJ with freeparty crew Every1sound system, he has appeared at raves, clubs and festivals in the UK, Europe and South America, with releases on labels including Stay Up Forever, Getafix, Acid Lab and Alliance Digital.

BIRINIGHT
BIRI AKA DJBIRINIGHT is a natural born musician from Portugal, where he made outdoor parties before coming to London. He runs 3 labels: Planet techno, UFO Recordings and Planet Acid Techno, which together have released many vinyl releases featuring techno and acid techno from artists across the world.

It’s now 25+ years he has toiled behind the decks as a DJ, with appearances in clubs, festivals, raves and many other places in the UK, Europe and beyond.

RATS ON ACID
The prolific producer has released acid techno and techno (under his Pest Control alias) solo and collaboration work on 303 Alliance, Avinit, Cluster, Hive, Impact UK, Pounding Warehouse, and Stereo Chaos to name a few…with much more in the sewer pipeline.

As a DJ he regularly appears on many of London’s soundsystems, a journey that started at the infamous Pawlett Manor with the GBH crew in the 90s.

JACK MAJIC
Jack can be found playing his own breed of London techno in various locations, for the infamous Stinky Pink, Hackney Sounds, and many of their peers.

His productions have also been released on Cerber, Planet Acid Techno, 303Alliance and Pounding Warehouse.

He is a regular performer on London’s underground warehouse techno scene, as well as bookings in Europe and beyond.

She also co-hosts and regularly performs with Bassline Ben on Acid Scum, a monthly radio Acid Techno show on Safehouse Radio on the third Wednesday of every month. She has also performed for Virus Sound System, Mix Hit Radio, Forest Of Dean, Croaktek Sounds, and Untitled_Techno.
Check ‘em out ‘ere:

Bassline Ben has previously been involved with organising events in the South West of the UK, and has recently set up Ocean City Acid Junkies with Aggie Acid Line, with events being planned for the near future. He also co-hosts with Aggie Acid Line a monthly radio Acid Techno show on Safehouse Radio on the third Wednesday of every month called Acid Scum. Check ‘em out ‘ere:


LIVE SHOW FROM FERRAMENTAL
Ferramental is a regular performer at raves, clubs and festivals, and will be bringing her live show to the dancefloor. Without giving too much away, it involves metal clothing, angle grinding, and a full-on performance – basically, you need to see it to believe it :-)))))

£10 in advance from www.accessallareas.org, more on the door. Ticket-holders will get sent the location on the day.

A private warehouse, 2 rooms, east london (zone 3). Bar, disabled access, security with zero tolerance to any harassment, negative behaviour or aggression. This is a party and venue for people to feel safe, free, and respected. If you don’t like the sound of that, don’t come. if you do like the sound of that, then see you there 😉 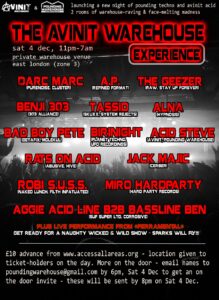